What it lacks in narrative chutzpah it makes up for in intriguing details of and implicit hints at the breadth and longevity of the multilingual literary culture of North India. The text is an example of how language use is continually negotiated and how multilingualism actually works in both the ‘real’ and literary world. 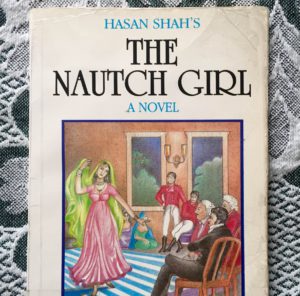 In another of our MULOSIGE blogs, Francesca Orsini has pointed to Qurratulain Hyder’s Fireflies in the Mist (1994) as an example of the author’s practice of translating her own works between Urdu and English. Here, we turn our focus to a work in which she acts as translator but throughout which, as we shall see below, she continues to assert an authorial presence. This work is the The Nautch Girl, a tale of love and loss set in the early colonial period in North India. First written in Persian in 1790 by Hasan Shah under the title Qissa-e Rangin or Afsana-e Rangin (The Multicoloured Story), and translated into Urdu with the title Nashtar (The Surgeon’s Knife, a reference to the pain of separation for the lovers) by Sajjad Husain in 1899, Qurratulain Hyder’s English edition – known as The Dancing Girl in the US and The Nautch Girl elsewhere – offers the third version of the story in as many centuries. Hyder’s claim that this is the ‘first known modern Indian novel’ has been disputed – notably by CM Naim (1994) and M Asaduddin (2002) – but this does little to detract from its interest as a text that illustrates multilingualism in a number of interesting and intersecting ways.

The Nautch Girl is purportedly an autobiographical work, centring on the Persian author Hasan Shah’s time working as the munshi of a British imperial officer, Ming Saheb. When a Kashmiri dance troupe is hired by Ming, Hasan Shah begins socialising – somewhat reluctantly at first – with the performers and their attendants. Khanum Jan, one of the performers and the ‘nautch girl’ of the title, attracts Hasan Shah’s attention; after a long back-and-forth of letters, the two marry in secret. After a year, Ming is required to move on, forcing the troupe to seek alternative employment elsewhere. Hasan Shah and Khanum Jan are separated, and delays in Hasan Shah’s work thwart the couple’s reunion. When Hasan Shah finally reaches the troupe in Lucknow, Khanum Jan has died of grief. Hasan Shah throws himself onto his wife’s grave, comforted by a vision of her that appears; he returns to Ming’s employ, grief-stricken but able to narrate his experience.

The characters move comfortably between Hindustani, Braj Bhasha and Persian

Throughout The Nautch Girl, the characters participate in a multilingual culture that draws on literary and performative traditions beyond Ming’s encampment. The characters, including Hasan Shah and Khanum Jan, move comfortably between using Hindustani (which Hyder refers to as ‘Urdu,’ presumably to reflect its use of the Perso-Arabic script), Braj Bhasha (called ‘Hindi’ in the translation) and Persian. The characters recite poetry and rely on a variety of literary references to express themselves and their feelings. The majority of these are in Persian, with Hafiz’s verses featuring prominently; but Hindustani-Urdu couplets are also recited at intervals (73 and 76 for example), and reference is made to a ‘Hindi tappa,’ poetry in a traditional Braj Bhasha meter, that Khanum Jan recites (44). The content of these literary references, similarly, indicates a multilingual and multicultural geography that extends beyond North India – the reference to Majnun and Leila, an archetypal pair of star-crossed lovers, indicates the characters’ participation in a literary-cultural sphere that encompasses Arabic- and Persian-language precedents (73). Similarly, the language used in the original text emphasises this linguistic breadth and fluidity, with Hyder commenting in her introduction that Sajjad Husain translated into Urdu a text written in a ‘simple “Hindi-ised Persian” language’ (5). These various interactions underscore the linguistic porousness of the milieu in which the characters move and in which their story was put to page. While this in itself is unremarkable for a locale like North India that we know to be multilingual, it is nevertheless fascinating to see how multilingualism manifests itself so clearly in a narrative from two centuries ago. Here, we perhaps observe resonances of – and even part of the inspiration for? – Hyder’s celebration of India’s multilingual poetic tradition in the midst of Fireflies in the Mist, a multilingualism of which she too was most certainly a part.

We are left with a text that clearly reflects its multilingual life, accruing new and distinct features as it moves between different languages in translation

The Nautch Girl is far from a simple translation, however. Hyder notes in her introduction that she has taken liberties with the poetic material that she has carried over from Hasan Shah’s original, ‘cutting down the ornate passages’ and ‘omitting most of the ghazals’; Sajjad Husain, she says, did the same in rendering his translation, ‘cutting out five pages full of ghazals’ (8). The addition of a foreword, afterword, and copious notes in Hyder’s edition supplement comments by Sajjad Husain on Hasan Shah’s original, providing personal and sometimes cutting insights on the narrative. (Hyder comments in her notes on a ‘sarcastic’ remark made by Sajjad Husain in a note accompanying his translation, for example; see 76.) These changes to the narrative and paratext create a work that is not a mere translation but what has, in the context of Hyder’s other translations, been called a ‘transcreation’ (Sangari 2005). Neither Hyder nor Sajjad Husain are completely faithful to Hasan Shah’s original, bringing knowledge of their respective audiences to bear upon the structure and content of the narrative. Hyder, for instance, includes fewer poetic interludes that are unlikely to resonate with English-language readers, tacitly recognising the underlying function of a translator to create a narrative that is palatable to a new reader, rewriting the narrative ‘with the English-knowing public in mind’ (quoted in Asaduddin 2008). In doing so, Hyder draws on her position as an author who not only works in Urdu and English, but who has moved between India, Pakistan, and the UK. Here, Hyder’s combining of linguistic familiarity with an understanding of varied cultural valuation ends up undermining her own approach to translation, intruding in the ‘faithful’ act of translation and creating a ‘transcreation’ imbued with her own linguistic and cultural experience. At the same time, we are left with a text that clearly reflects its multilingual life, accruing new and distinct features as it moves between different languages in translation.

A short and simple read, the narrative of The Nautch Girl is in itself not a particularly thrilling one, appearing somewhat staid in the eyes of the modern reader – character development is lacking, and Hasan Shah relies on repeated allusions to the long-standing tradition of devotional poetry to push the narrative along. Nevertheless, the work should not be disregarded completely, for what it lacks in narrative chutzpah it makes up for in intriguing details of and implicit hints at the breadth and longevity of the multilingual literary culture of North India. The text is an example of how language use is continually negotiated and how multilingualism actually works in both the ‘real’ and literary world (which, in this case, intersect). For this alone, The Nautch Girl – and its antecedents – merit continued and closer attention.

Find the book on WorldCat

Conference: The Poetics and Politics of Writer-Activism in the Global South

MULOSIGE is co-organising the conference "The Poetics and Politics of Writer-Activism in the Global South: Between Local Engagement and World-Making Solidarities" with The University of Mohamed V, Faculty of Letters and Human Sciences; Rabat, Morocco, 16-17 April 2020.

In this podcast, Dr Fatima Burney talks to Professor Roanne Kantor about her upcoming book, Even If You Gain the World: The Rise of South Asian Literature in Light of Latin America.

A Case of Exploding Markets: Latin American and South Asian Literary “Booms” in a Comparative Perspective

This excerpt is taken from an interview with Professor Kantor and Dr Fatima Burney about Kantor's upcoming book Even If You Gain the World: The Rise of South Asian Literature in Light of Latin America.

About the Author: Jack Clift

Jack Clift is a doctoral researcher working on the North India case study of the MULOSIGE project. Jack's current research focuses on historical fiction in Hindi and Urdu. His previous work has centred on iterations of nationalism in literature from Francoist Spain and Nasserist Egypt, and the use of Arabic by a North Indian Muslim reformist group in the nineteenth and twentieth centuries.