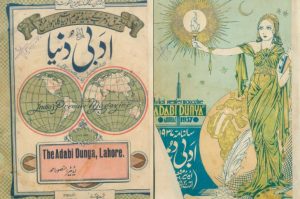 North India had been a major participant in the Persian cosmopolis; the older parallel expansion and cultivation of literary production in Persian and various forms of the vernacular (in multiple scripts) persisted even as in the 19th century English gradually imposed itself as the new High language and as the model of literary modernity, and Hindi and Urdu codified their own historical narratives in competition with each other. Persian literature was subsequently marginalised and the old Persian-Hindi diglossia disavowed. Despite persistent low literacy, from the 1860s publishers in north India were multilingual and active in South Asia and beyond, and a heterogeneous print culture developed consisting of joint journal-and-book-publishers, theatre chapbooks and songbooks. The English colonial library also had a large lucrative market here, and early global writers like Kipling made north India part of the “significant geography” of English literature.

How did north India work as a “multilingual local” in the late colonial period (1880-1940)? The project will focus on the short story, translations and literary debates on world literature in Hindi, Urdu, and English journals; on “readerly contacts” with English and other foreign and Indian literatures and transculturations; and on the inclusion/exclusion of orature from literary canons. It will then consider post-colonial developments, including writerly reactions to the political marginalization of Urdu and initial rejection of English; literary debates, translations and circulation of world literature in journals (including the influential “little magazines”); and the important domain of theatre, which negotiated pre-colonial traditions, Indian multilingualism, and “foreign” modern forms and intercultural experiments (Dalmia).

Finally, against the recent international boom of Indian fiction in English, we will discuss with local stakeholders current trends in writing, publishing, and translation. Here our particular focus will be on poetry (Mehrotra, see Zecchini), in order to show how much of contemporary non-western literatures and literatures produced in multilingual locations today falls through the cracks of the paradigms provided by the global meta narratives. Local partners will include participants in the earlier Leverhulme network on postcolonial translation in South Asia (Srivastava, Kumar), publishers, and the organizer of the Jaipur festival (Gokhale), the largest literary festival in Asia.