Our discussion with Professor Majeed on the Linguistic Survey of India and George Grierson was filled with interesting and productive paradoxes.

A recurring theme in the work of Professor Javed Majeed (King’s College London) is that of instability and uncertainty – linguistic, epistemic, or otherwise. Professor Majeed joined us for an informative and enjoyable reading group on 21 February 2017, where we discussed a selection of his work, including some of his most recent contributions on the Linguistic Survey of India (LSI) and its superintendent, George Abraham Grierson (1851-1941). The LSI was one of the earliest comprehensive surveys of the languages spoken in India and was painstakingly carried out between 1894 and 1927, documenting the names of languages spoken across India, estimating the number of speakers for each language, and attempting to classify them into recognisable language groups and families. Equally painstaking has been Professor Majeed’s work on the nineteen volumes of the LSI, which will soon find form in a long-awaited monograph.

The survey and its contents had a thoroughly destabilising effect on English as a language, and the Roman script in which it is written 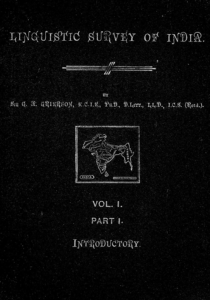 Our discussion on the LSI and Grierson was filled with interesting and productive paradoxes. The LSI was, on the one hand, very effective in clarifying the linguistic situation of the areas of India under British rule, demystifying to a certain extent the languages spoken by people across the country. New details on the speakers of hundreds of languages were provided, new links between language groups were forged, and data was rendered in illustrations of the areas where languages were spoken, offering important insights into the linguistic geography of India. At the same time, as Professor Majeed points out, the survey and its contents had a thoroughly destabilising effect on English as a language, and the Roman script in which it is written. The inconsistency with which name of Indian language were transliterated into English and the variability in how these names were applied, for example, underlines how ineffective English was in rendering Indian languages in a familiar way. In one memorable instance, colonial administrators fell back on using the Perso-Arabic letter ʿain (ع) to represent a sound for which there is not English equivalent – hardly an assertion of English’s potential for accurate transcription! English, far from being a language of stability and solidity (characteristics often associated with its dominance in the colonial period), was as such a language that was unable to reflect the linguistic variance of India in a unitary manner.

Grierson found authoritativeness in the LSI’s ability to reflect the linguistic situation on the ground as accurately as possible, replete with all its nuances and, frequently, contradictions

All this, Professor Majeed suggested to us, was reflective of an alternative epistemology under which Grierson and others like him operated: rather than seeking authority in stability and sameness, in the homogenising effect that English could have on languages of the Indian subcontinent, Grierson instead found authoritativeness in the LSI’s ability to reflect the linguistic situation on the ground as accurately as possible, replete with all its nuances and, frequently, contradictions. The point was not to have a sanitised and simple picture of India’s languages, but one that was as true to life as possible – hence the more than 10 names used for Telugu in the LSI, reflecting how Telugu speakers referred to their own language. Professor Majeed’s work has important implications for our understanding of colonial knowledge production and those active in its creation and reproduction. Far from being a homogenous block undergirded by a unitary epistemology, colonial knowledge was a variegated and often highly polarised endeavour, with the individuality of colonial officials reflected in their intellectual approaches. The numerous ways in which English was destabilised in this period, furthermore, offers an alternative history for how English and other languages on the Indian subcontinent came to acquire the positions they hold today.

Join the MULOSIGE team for our next reading group! Check out our Reading Group page for more information and get in touch with us through our Contact page if you would like to join us.

————-: ‘What’s in a (Proper) Name? Particulars, Individuals, and Authorship in the Linguistic Survey of India and Colonial Scholarship’ in Knowledge Production, Pedagogy, and Institutions in Colonial India, eds D. Ali & I. Sengupta (New York: Palgrave Macmillan, 2011), 19-39.

About the Author: Jack Clift

Jack Clift is a doctoral researcher working on the North India case study of the MULOSIGE project. Jack's current research focuses on historical fiction in Hindi and Urdu. His previous work has centred on iterations of nationalism in literature from Francoist Spain and Nasserist Egypt, and the use of Arabic by a North Indian Muslim reformist group in the nineteenth and twentieth centuries.