Making the child ‘sharīf’ in Urdu textbooks – Muslim, yet not Islamic

Sumaira Nawaz recently completed an MA Languages and Cultures of South Asia from SOAS, University of London, where she was supported by a Felix Scholarship. She has spent the last five months learning Farsi in Tehran, and also works as a researcher with Rekhta 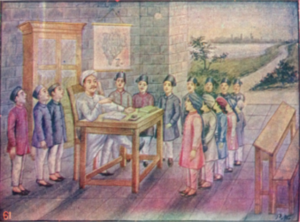 A schoolteacher in his classroom with Hindu and Muslim pupils; a paternal guiding figure, he is portrayed as an ideal to be followed by all young boys (source: Urdū kī tīsrī kitāb, 1930: 61)

Urdu publications brought forth by North Indian service gentry (ashrāf)—Chand Pand and Meraṭhi Textbooks, were engaged in the colonial project of education that saw itself as a “civilising process.” Margrit Pernau defines ashrāf not primarily as a “class” based on common social and economic status but as the belief that they were a “certain kind of person,” using their way of life, ethics, values and emotions as a means of differentiating themselves from others. This feeling of sharāfat (nobility in ethical terms), emerged as a point of aspiration for all; when the British turned their attention towards elementary education they relied on tahzīb ul-aḳhlāq, which was common to the service gentry, both Hindus and Muslims.

Urdu educational texts also allow us to see how social hierarchy within the Muslim community was reproduced even when no Islamic mandate was provided for it and despite the Victorian-Indian reformist valuation of hard work. According to Nazir Ahmed, sharāfat was restricted to those engaged in trade, zamindarī, medicine, and least of all government service because it required working in a subordinate position. Ismail Merathi’s textbooks tried to insert peasantry into this fold. These texts were not merely translating Victorian values into Urdu education but redefining the discussion around exactly which ajlāf bodies should be avoided.

Nazir Ahmed wrote Chand Pand (1871) for his son Bashiruddin, to guide him from boyhood to manhood, with good manly virtues and health. The Urdu aḳhlāq text has three thematic concerns: bodily habitus—safayī (cleanliness), sonā (sleeping), khānā (eating), libās (attire); followed by control of emotions—gḥussā (anger), lālach (greed), darpok honā (cowardice), behayāyī (shamelessness); and finally mazhab ke ehkām (religious ideals). Unlike the classical aḳhlāq tradition, which was based on balancing of four humours (bile, phlegm, blood and black bile), Chand Pand placed emphasis on diet and the environment’s role in creating a sense of collective responsibility around teaching children ideal behaviour required for polite society. Chand Pand’s lucid vernacular idiom could be grasped by a child as well as a barely literature reader; it received patronage from Mathew Kempson, Director of Public Instruction, who included it in the government school curriculum as a textbook in an attempt to promote moral improvement. 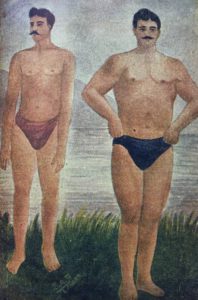 ‘Varzish’ (exercise): the broad-chested man in the front exercises daily playing cricket and occasionally wrestling, while the man in the background is weaker and has bad posture owing to his laziness. The former is more aligned with respectable values (source: Urdū kī chauthī kitāb, 1946: 12)

It made emotion-virtues available to all as a point of aspiration but they could be embodied by only those sharīfzāde who had ilm (education) and access to “rich resources of etiquette, ceremony, hospitality, aesthetic tastes and kinship alliance” owing to their family status.[1]  “One must only befriend boys who belong to respectable and sharīf families” and, even while playing, “avoid mimicking kahār (palanquin bearers) and drivers.”[2]  The constant insistence on sohbat (company) with one’s own kind as a parenting ideal expressed the need to live in a well ordered, respectable community, away from the bad habits of menial boys that could spread like an epidemic.

The homosocial environments of the akhaṛā were also seen as a dereliction of domesticity for the male child, moving away from family duties, into a masculinised culture that had come to be associated with the sedition of soldiers during the Revolt of 1857. Colonialism altered socio-cultural priorities of the new ashrāf, insofar that the British fear of native’s physical strength was mapped on to their minds as a beastly or debased attribute; this became bodily habitus of the ajlāf who lived to till, carry loads and serve. “Brute strength is a kind of attribute that is found more in worthless and menial beasts.”[3] The wrestling pit, much like the unrestricted space of the street, was also a site where physical interaction of bodies of ajlāf and sharīf boys happened with gross disregard to social order.

Chand Pand restricts itself to the city, silencing rural culture because it lacked “protocols of style and decorum” needed to interact in polite society, “effectively marginalising members of plebeian classes.”[4]  In the Meraṭhi Readers, by contrast, mazdūr and kisān (workers and farmers) changed from distant popular masses to objects of quotidian public expression in the age of mass memorisation, extolling values of hard work, frugal living and moral discipline. Muhammad ‘Ismail Reader or Meraṭhi Reader and primers were Urdu textbooks published by the Naval Kishore Press. Much like other textbook writers such as Maulvi Karim Bakhsh, Ram Chibber, Mumtaz Ali, who were all associated with the colonial administration working in universities or Textbook Committees, Ismail Merathi (1844-1917) too was a retired Persian teacher from the Government Central Normal School, Agra, and his readers were used for elementary education in Anglo-Vernacular schools. At a time when syllabus and course books were emerging as spaces for determining the literary canon, his poetry was unique in its emphasis on rural poor and pastoral imagery.

Merathi’s textbooks were framed by the constant need to extend sharāfat to peasants and labourers because their toil was the backbone of the nation, marking their work as jāyaz peṣā (legitimate work). It differentiated them from the adnā (futile work) of the razīl (menial) that involved khāk-robī (sweeping), the excessive manual labour of coolies, mud diggers, lumberjacks and even gambling, thievery et al. Bad-māsh referred to both agents of social disruption and men engaged in menial occupations with no hunar (skill) to sustain themselves, contributing nothing for the betterment of society. This emphasised the impact of individual ability even in oppressed positions, implying that the inability to amass wealth was due to a lack of individual skills and could be overcome with the right effort. “People who acquire highly esteemed skills, acquire highly esteemed jobs. And those with less skills, are forced to engage in futile professions. Sharīf men only engage in legitimate work to earn their income.”[5] 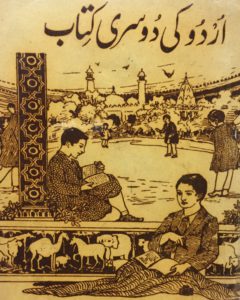 When I say that the ideal child was Muslim yet not Islamic, I begin to highlight the various non-religious motifs—occupation, caste, and political leaning— used to formulate Muslim self-identity in Urdu children’s literature. This “normative” identity was invariably that of the respectable “new ashrāf,” and potentially anyone could aspire to this ideal as long as they felt like one. Yet the disciplining regime of feelings and emotions extended into wider tensions around the meaning of sharāfat, because asal (ancestry) continued to determine who could embody these qualities, which points to the exclusive nature of this social category. An analysis of Chand Pand most strikingly reveals that the normative “respectable” Muslim had to embody his emotions in his gestures, clothes and company because bad habits of the diseased ajlāf body spread like a virus. Here, the meaning of “menial” shifts between lowly born and debased, lacking social values and engaged in manual labour. So one could only feel like an ashrāf if they were respectable and if their means of earning a living also corresponded with dominant culture’s standards. The Meraṭhi Readers turn in a different direction, preaching goodness towards all, but I argue that they created a split between ajlāf and redefined the boundaries of sharāfat instead of abolishing them. Farmers and workers who could contribute to national productivity and progress were different from sweepers, lumberjacks and coolies and hence commanded a higher status. Social hierarchy continued to be preached using both the metaphor of labouring farmer because that was his “natural” position, and excluding the adnā (futile) services that could not contribute to national wealth.