Mulugeta Alebachew is a translator and an aspiring writer based in Addis Ababa. He occasionally contributes articles about Ethiopian literature, translated short stories and book reviews to Amharic journals and magazines. He has recently published a collection of Amharic short stories titled “Mehareben Yayachihu” (2017). Mulugeta has studied English literature at Addis Ababa University. 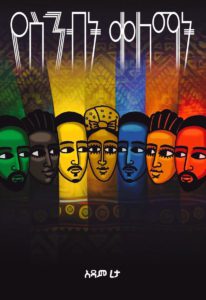 The “Colors of Adios” (የስንብት ቀለማት, Yäsǝnǝbǝt Ḳälämat, 2016) is the most recent novel by the famous contemporary Amharic writer Adam Reta. It is made of eight chapters where each chapter is named after a specific color. The titling of the chapters brings into attention Victoria Finlay’s book “Color: A Natural History of the Palette” or Miles Davis’ 1989 album “Aura”. One might ask “what has the colors got to do with the stories”? The colors are more than just titles. They were primarily used to design the morphology of the novel. The reader is asked to travel back in time to Newton and his experiments with light and prism. And also the colors are entwined with the content, as motifs, each color setting the theme of each chapter.

The book portrays interconnected stories with over a dozen characters. On the surface, they tell simple love stories between humans and other ‘beings’ – animals and mythical creatures. Adam narrates the various ways the couples come together and fall apart. It shows in a very humane and empathic fashion, the agony, the heartbreak they experience after their break ups. But that is just the epidermis of the narratives.

Contrary to what the titles of the chapters might suggest, the themes raised are hardly colorful

Beneath the surface of these stories are serious issues. I find it to be a skillful rendition of the zeitgeist of the time and place in which the stories are set, the late 1990s Ethiopia. It was a time when the country underwent crucial changes that somehow defined the politics, culture and popular psyche of current Ethiopia.

Contrary to what the titles of the chapters might suggest, the themes raised are hardly colorful. The overall mood of the book is gloomy. Except for the ending, which is literally colorful and leaves the reader ever optimistic. Through the interaction of his characters, Adam has skillfully painted an uncanny image of the nation at present times. The novel shows an archipelago of disparate intentions and anomie. It tells about unscrupulousness and immorality. It also questions both our interpretation of history and our self-perception.  This is all quite a myriad combination of solid themes to deliver in a mere novel of 1000 pages, right? This is what makes the book hard to put down once you start reading it.

The author has always been uncomfortable with anthropocentrisms. Often his fictions involve potatoes, dogs, rocks, personified flowers and whatnots

“Colors of Adios” is an avant-garde fiction. It has elements unfamiliar to the Amharic novel, elements peculiar to the author’s innovation. Endnotes, footnotes, diagrams, tables, text in color etc. are sprinkled all over the pages. The meticulousness with which all this was crafted is venerable. There is no single detail that is provided inadvertently, and there is nothing left to obliviousness.

The author has always been uncomfortable with anthropocentrisms. Often his fictions involve potatoes, dogs, rocks, personified flowers and whatnots. All these entities have had their own share of pages in his previous works.  For him, objects too are as important as everything else. This ‘object orientation’ of his, not only renders his stories with verisimilitude but also helps him in providing a believable delivery of a ‘representation’ of ‘everything’. And that is exactly what he did in Yäsǝnǝbǝt Ḳälämat.

“Colors of Adios” is a call for Ethiopians to go back to the unadulterated past which is personified as the fabulous character Sinziro. (Named after sǝnzǝr, the Amharic word for the distance between the stretched thumb and middle finger.  It is also similar to Tom Thumb of European folktales). Sinziro come from a primordial time and is portrayed as a creature having the skills of a demi—god. He arrives to the present passing through innumerable deaths and resurrections and falls in love with a virgin by the name Mitké.

Mitké conceives a child of Sinziro’s. The meaning of her name, which means a replacement for someone else, and the fact that she gets pregnant while being a virgin suggests that she is an allegory of St. Mary. The son, obviously the new Christ, who has his father’s physical features, is expected to redeem the nation.

In this novel, Adam attempts to redefine the pillars on which the nation is built upon. He tries to redefine Ethiopia and Ethiopianism. Tewodros Gebre, a literary scholar, described Yäsǝnǝbǝt Ḳälämat as a book signaling “a new state formation”. The farewell suggested in the title is not mere parting of lovers. It could also be the departure of all the problems Ethiopia is facing currently. That is what the author is wishfully saying adios to.

Copies of Adam Reta’s works can be found here.