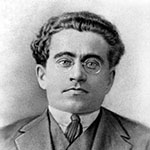 In this podcast Dr Thomas Langley makes a case for reading Antonio Gramsci as an anti-colonial writer. Few thinkers have been as central to the theorisation of the postcolonial as Antonio Gramsci; as Timothy Brennan has observed, ‘it is difficult to find work in postcolonial studies which does not cite Gramsci’ (Brennan, 2007). Despite this, we still have a very limited sense of the way in which an analysis of colonialism features in Gramsci’s own work. By turning to some of Gramsci’s lesser-known pre-prison writings we can trace lines of continuity that underline the centrality of questions of colonial and imperial power in his work, and foreground the ways in which his writing is characterised by a consistent attempt to locate Italy as a terrain of struggle in relation to broader contours of colonial exploitation and anti-colonial resistance. At the same time, however, I want to emphasise the literary dimensions of this act of imaginative positioning: Gramsci’s anti-colonialism is something that is worked out through often surprising acts of creative reading and writing.

Dr Thomas Langley is a Lecturer in Comparative and English Literature at King’s College London, and recently finished his doctorate at Newcastle University. His research is interested in thinking about Italy as a postcolonial entity, and particularly in relationships between literary anti-Fascisms and literary anti-colonialisms in Italy and India in the twentieth century.

This event was part of the MULOSIGE seminar series hosted by CCLPS at SOAS .